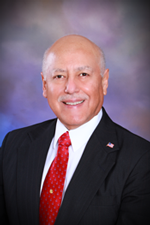 Born in Anthony, Texas, he grew up in Canutillo and graduated from Canutillo High School in May 1969. He enlisted in the United States Army on August of 1969 and by the second week of January 1970, he arrived in Vietnam and served eighteen (18) months ending his tour in August 1971. He was in an aerial reconnaissance company whose mission was to fly surveillance using radar, photographic cameras, and infrared systems to detect the enemy. He was honorably discharged in February 1972 and attained the rank of Specialist 5th class. Within three weeks after his military discharge, he applied and was hired as a title examiner in March 1972 with the Texas Highway Department. Here he began his journey in Motor Vehicle Administration until his retirement with over 38 years of faithful service in July 2010.

Mr. Gonzalez is an energetic professional with over 38 years of experience in progressive leadership capacities, including more than 26 years in the role of Regional Manager for the Texas Department of Motor Vehicles in two regions.

Mr. Gonzalez has demonstrated Public Relations skills (in English and Spanish) and has thorough knowledge of Title and Registration policies and procedures and other relevant areas.

Mr. Gonzalez goal as a Regional Manager in both El Paso and Odessa, Texas provided the opportunity to train newly elected Tax Assessor-Collectors by preparing them to be effective servants and leaders in their communities. He was also instrumental in the development and execution of many policies and procedures that led to measurable improvements in both efficiency and customer service in his regional offices.

Additionally, he made a point to forge and maintain strong and strategic relationships with other community servants, groups, and individuals to best serve the community and the State. His tireless efforts have earned the recognition of co-workers as well as industry and government officials.

As a happily married man for over 39 years, he and his wife Elvia have two daughters, Mikael Star and Jaclyn Dian who have given them the joy of being grandparents to three grand kids, all boys!

Delinquent Vehicle Registration Statement
Use this form when registering a vehicle that has an expired registration sticker. This is to affirm you have not operated nor received a citation for operating the vehicle with an expired sticker.

Employee Complaint Form
Use this form if you wish to file a formal complaint.

Employee Compliment Form
Use this form if you were pleased by the customer service you received at our branch office.